Join the Northampton Student Sports clubs and the rest of the Athletic Union for the biggest and final event of the academic sporting calendar! The annual Sport Awards evening takes place at the Royal & Derngate theatre, ensure you get your ticket before they sell out for a night to remember.

Tickets are £36 each and include a three-course meal which you will chose when you purchase your ticket, a champagne drink on arrival as well as free entry to the Official After-Party at The Platform (before 11pm). This year the awards evening will be hosted by your Sports Officer, Alex Lopez.

A range of awards are presented on the night, these consist of club, team and individual awards. All nominations for all awards are reviewed and voted on by a panel consisting of Students Union staff, Elected Officers and a member of the Changemaker team.

The shortlists for the awards are:

First Year of the Year:

Sportsman of the Year:

Sportswoman of the Year:

Sports Personality of the Year

Team of the Year:

Club of the Year: 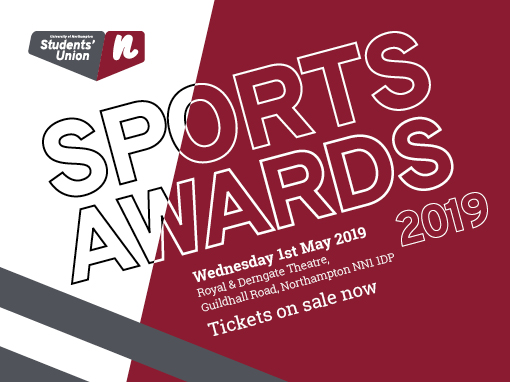 If you have any questions, please email [email protected]